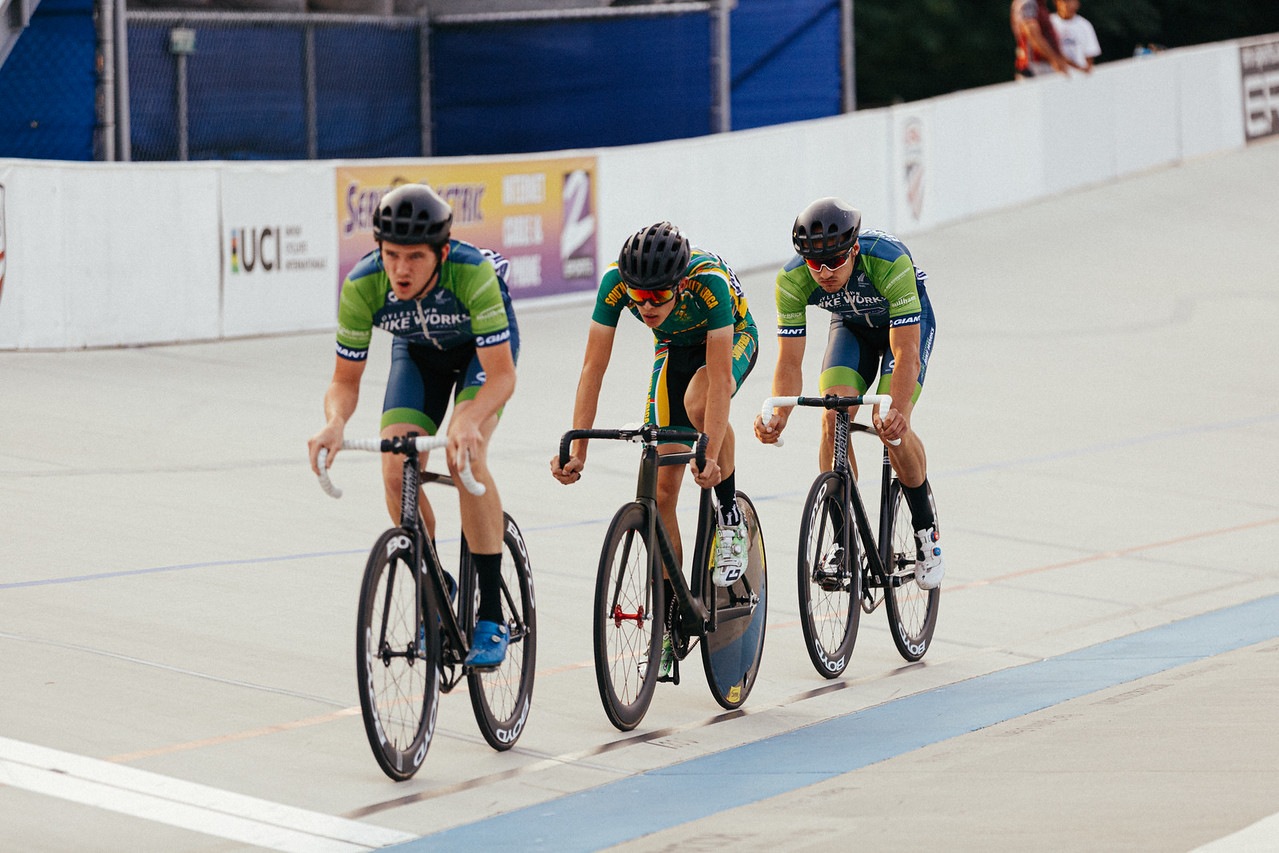 All summer our elite and junior riders having been busy honing their racing skills at America's premier velodrome, the Valley Preferred Cycling Center (Breinigsville, PA) in the nearby Lehigh Valley. Popularly known at "T-Town" for the nearby village of Trexlertown, this is where the top international and domestic Olympic riders come to train and race. While you are here, if you'd like to see the full catalog of photos that Mike Maney shot of our team members racing in the Pro/Am Super Tuesday on July 9th click here. Thank you Mike for capturing our racers in action in T-Town. 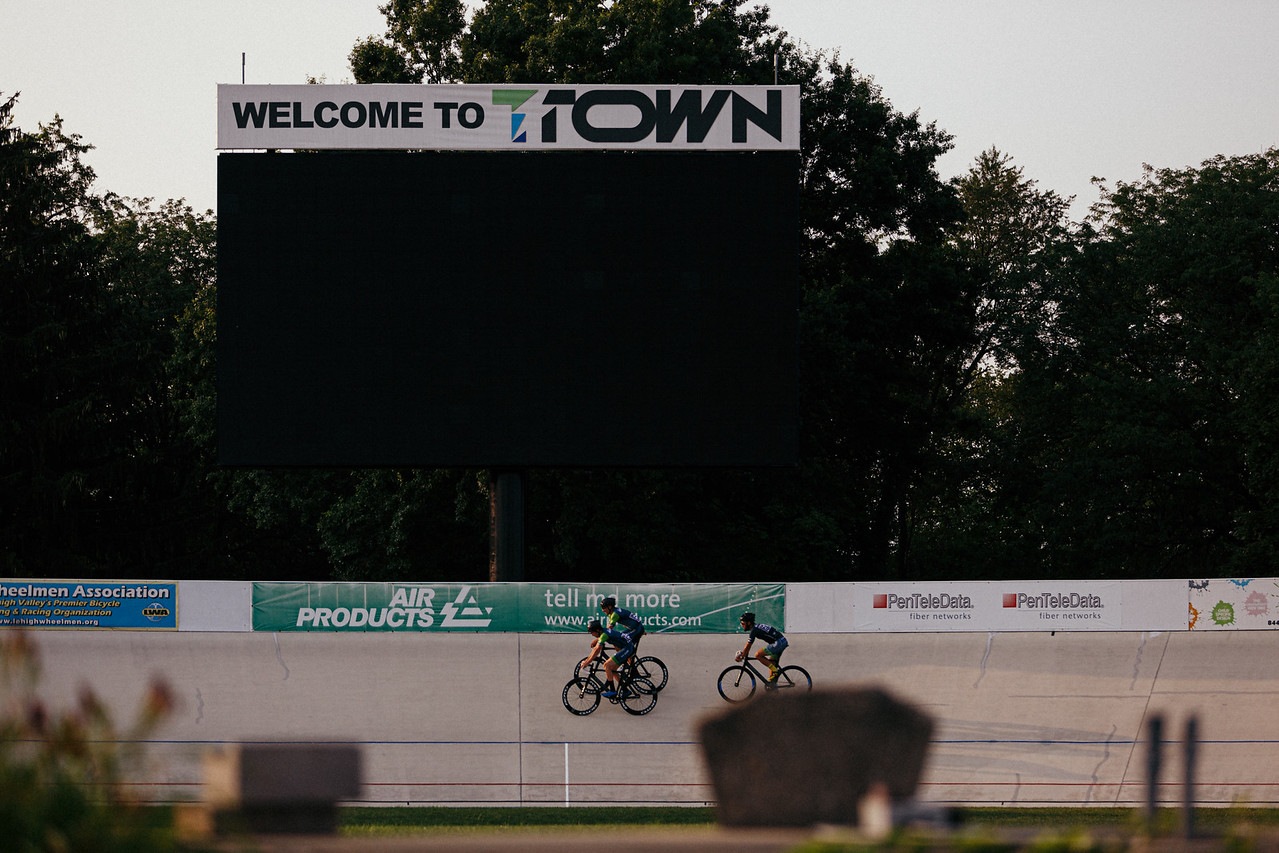 "T-Town" is known as one of the premier velodromes in the USA. Photo: Mike Maney

Friday nights are when the big guns come out to race at the track, and on Friday July 19th Doylestown Bike Works will sponsor the "Golden Wheel" event at the track as part of the World Series of Bicycling. For those not familiar with the different disciplines in bicycle track racing, the Golden Wheel will include scratch races and elimination races. Here's a longer article on track racing if you want to know more. You can also expect to see some of our elite racers like Chris Meacham (Doylestown) and Wes Kline (Emmaus), as well as perhaps some of our junior racers. We are also looking forward to seeing Dan Turner of DBW, Gui Nelessen (Lambertville, NJ), and Keith Hyland (Phoenixville, PA) re-create a turn-of-the-century, vintage "Pennyfarthing" race on the steep banks of the velodrome. 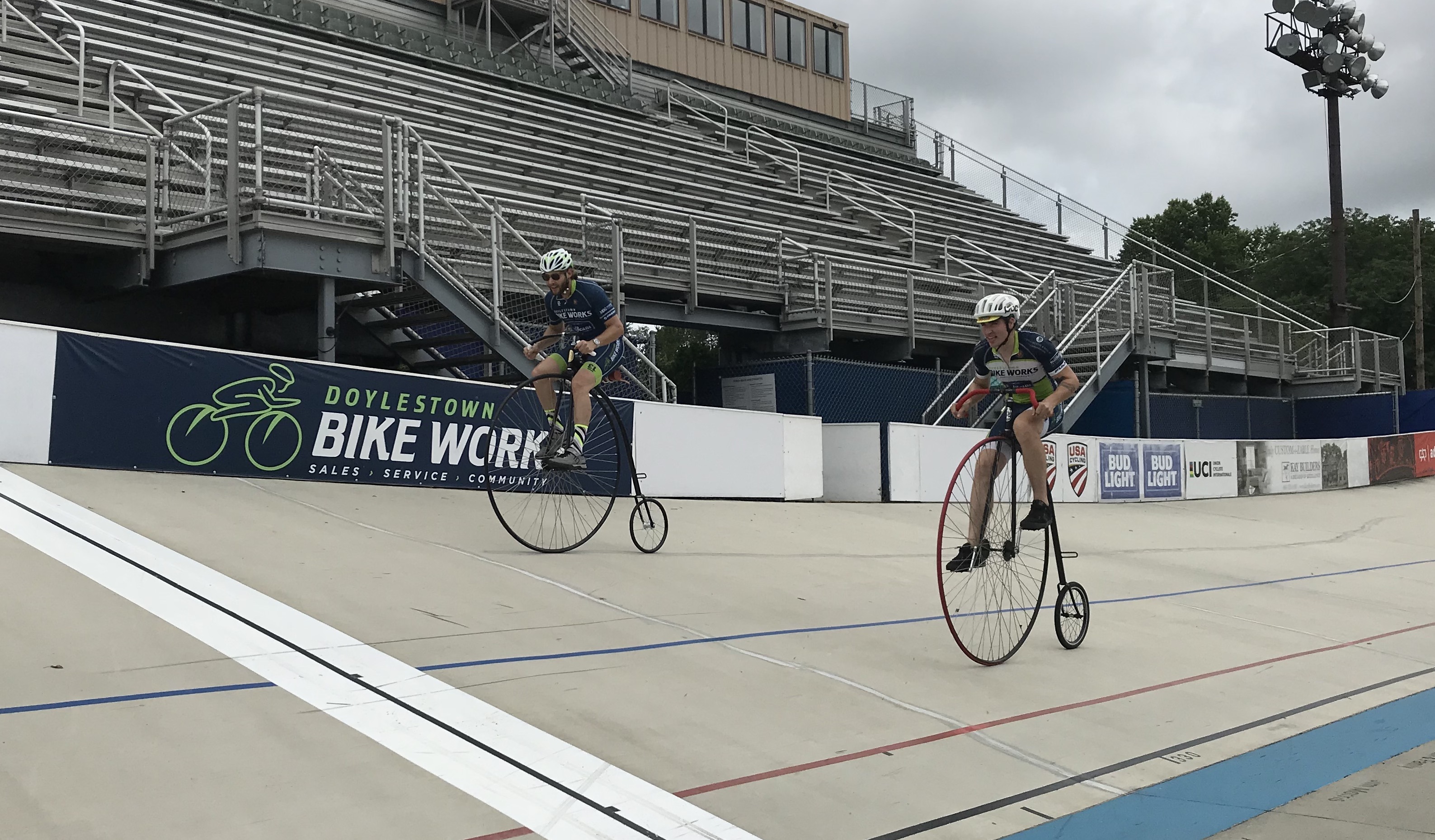 From the 1880's to about 1896 the vintage bicycles known as "Pennyfarthings" or "Ordinaries" dominated bicycle racing in Europe and America. Bicycles were typically raced on velodromes, as roads were still a muddy, rutty mess. Bicycle racing was a craze across the country, with famous professional racers barnstorming from city to city. New York City's Madison Square Garden was built for bicycle racing. It wasn't until the invention of Michelin's pneumatic tire, the bicycle chain, and the equal-wheeled "safety bicycle" that the Pennyfarthing became obsolete. We look forward to recalling that time next Friday, and demonstrating the skill and courage required to race on a concrete track with your head eight feet about the ground. 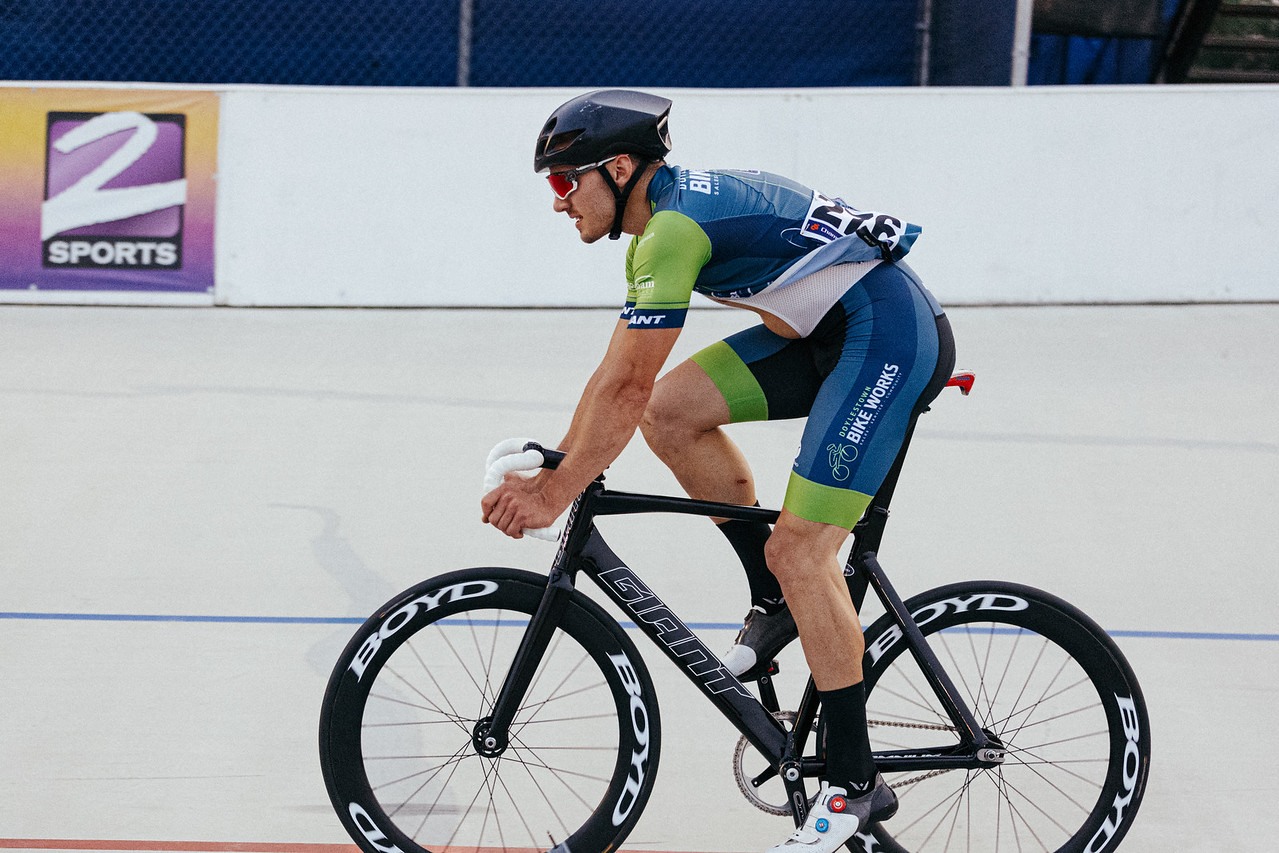 Today track racing is performed on specialized bicycles. "Track bikes" have one "fixed" gear meaning that the rider cannot coast (no "free wheel") and the bikes are not equipped with brakes. Counter-intuitively, these bikes make racing on a velodrome safer for the racers. Our team rides on Giant Omnium aluminum frames from our sponsors at Giant Bicycles. The bikes are equipped with custom-made, carbon wheels from our friends at Boyd Cycling. 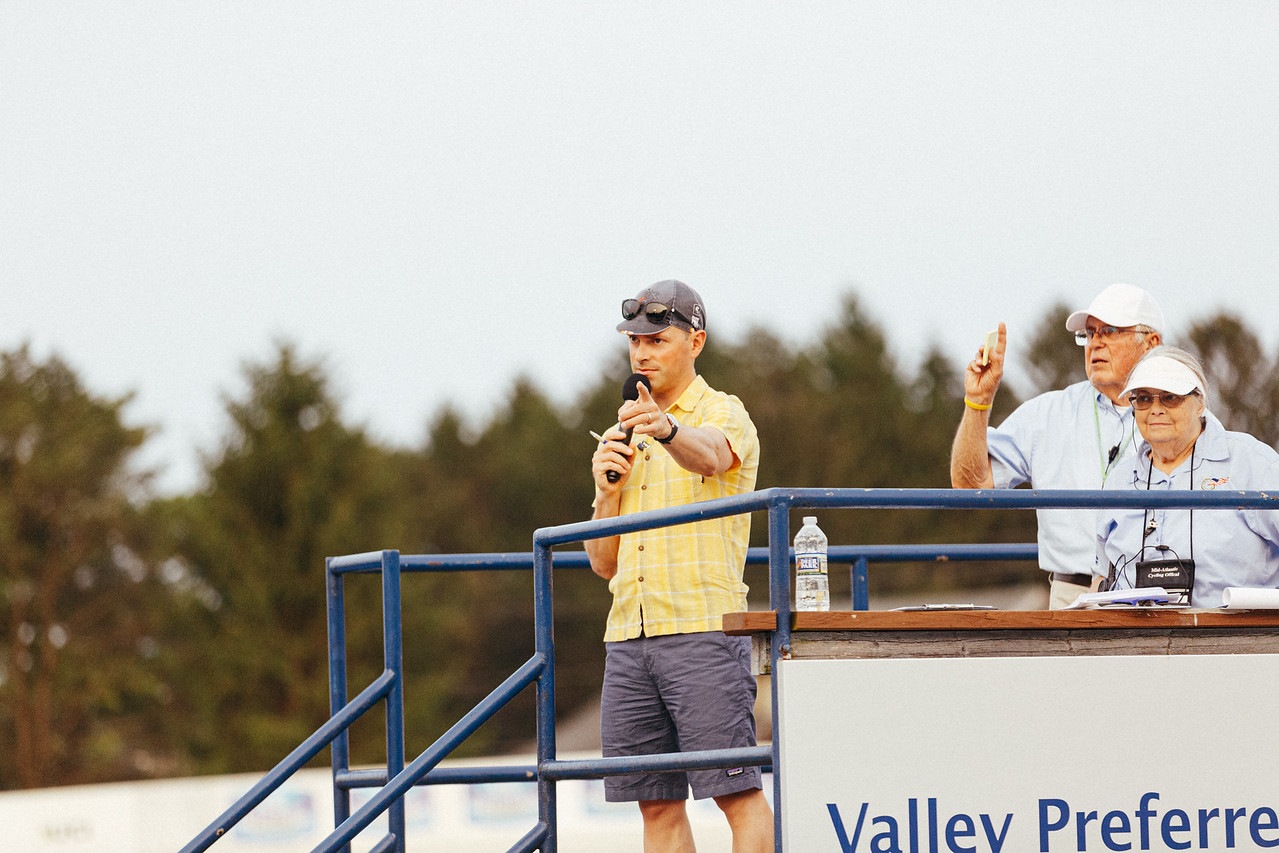 If you've never visited the Valley Preferred Cycling Center you are in for a treat. The facility itself is located in the nearby beautiful Lehigh Valley. The viewing areas and concession stands are first class and the prices are family-friendly. Gabe Lloyd serves as the master-of-ceremonies and helps everyone to understand the sometimes arcane world of track cycling. Additionally, if you enjoy craft beer, the local folks at Funk Brewing in Emmaus enjoy a great reputation and supply all the beer at the velodrome. There are also local wines. Join us on Friday July 19th at the Golden Wheel!